Ancona
the capital city, having a long standing maritime tradition, situated in one of the most beautiful stretches of the Adriatic coastline, the Riviera del Conero, located in the homonymous regional park. This protected area features a series of bays,
steep cliffs and hidden beaches. A must see site is the so-called Due Sorelle (Two Susters) beach, namea after two large rocks emerging from the water and of course the lovely old village of SIROLO offering splendid panoramic views.
Spectacular sunset and sunrise over the sea.

Loreto
Just a few km south and slightly inland you should visit Loreto developed around
the Sanctuary of “The Madonna di Loreto” and the Basilica that contains the
“Santa Casa “ (the Holy House of Nazareth) where, according to tradition, the Virgin Mary was born, lived and received the announcement of the miraculous birth
of Jesus. The Holy House Treasure includes valuable works of refined jewellery. 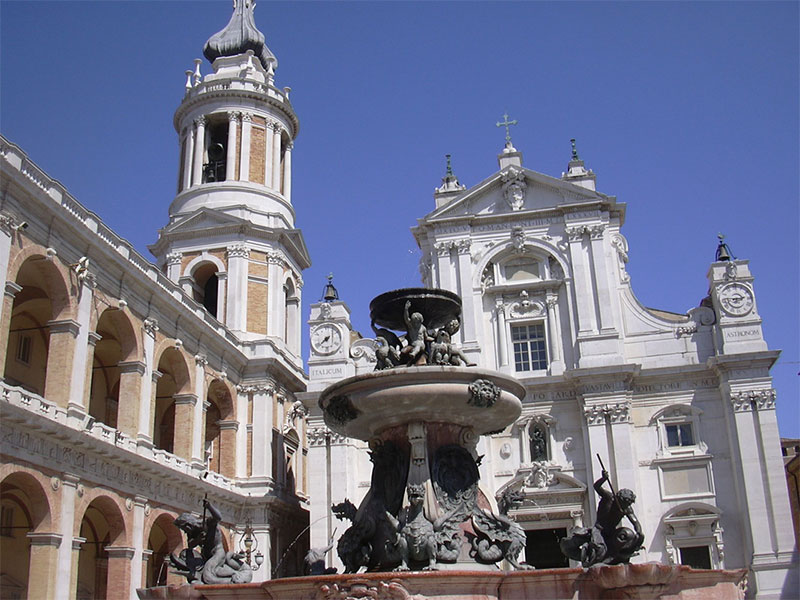 Just south of Porto Recanati is Civitanova Marche with a long sandy beach to the north, rocke to the south, divided by the fishing port and the marina.

The town gives the chance to practice different sports, to go to trendy places and enjoy shopping in the many outlets in the are bearing the prestigious “Made in Italy” brands.

Only a few km inland from the beaches,

Enrich your fantastic stay in a villa in Le Marche with an extraordinary and unique appointment in the fantastic setting of the Sferisterio semicircular open air theatre, 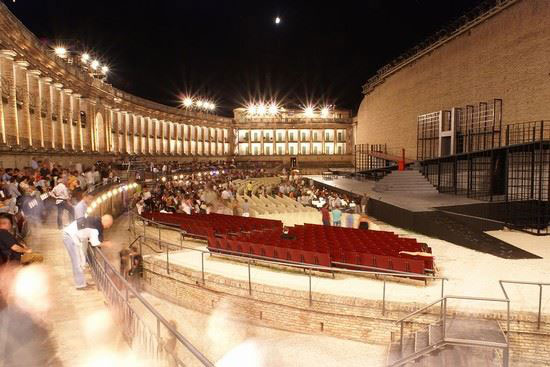 Much further south along the coastline, you’ll come across Grottamare, the Pearl known as the town of oranges with its 5 km of fine sandy beaches, till you reach

Ancient villages in the Marche.

The Appenines on a side, the Adriatoc cosat on the other, and, in-between a sea

of gentle hills which are filled by old villages protected by ring walls, these are the Marche. In this area, where most of our villas are located, you can visit

Camerino which enjoyed a period of great economic and artistic importance in the 15th century. From Camerino you can easily reach Tolentino where the chapel of the Basilica of Saint Nicola contains some of the most outstanding 14th century frescoes. Nearby is the small town of San Severino Marche with its Gothic buildings. 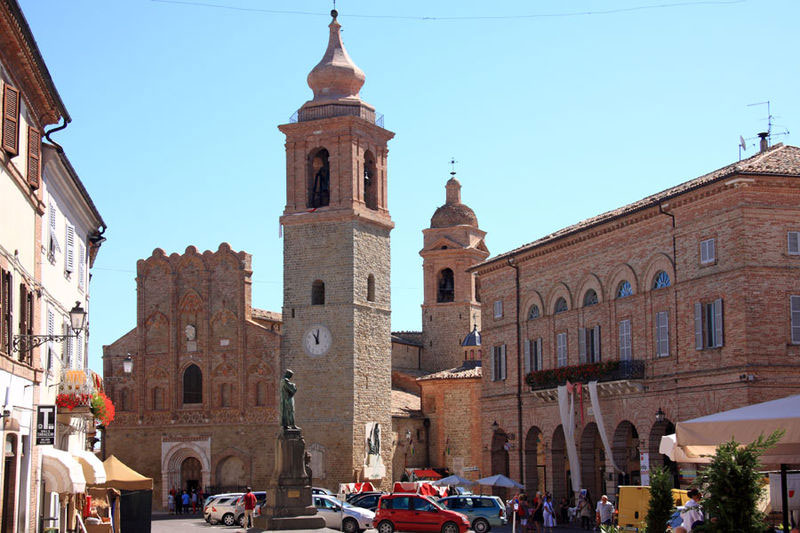 Everything focuses on the village of San Ginesio is considered one of the most beautiful villages in Italy, hardly known but well worth a visit. Encircled by original 14th century walls. On entering the village you’ll be pleased to admire the narrow cobbled streets and alleyways till you reach the main square Piazza Gentili, cradle of art, history & culture. You will no doubt notice the Chiesa Collegiata,rather the most important Church here, characterized by having two facades: the uperr one in gothic style and the lower one in romanic style.

So have good journeys along the itineraries full of old towers, historic buildings,

Charming castles, silent rural parish churches, wells, shrines, hermitages, discovering all your way long this small but beautiful and fascinating side of the Marche.

National Park of the Sibillini mountains. It covers an area of 70.000 hectares of protected land established in 1933. The great limestone massif that stands in the southern part of Marche includes one of the highest peaks on the Italian mainland, Mount Vettore 2.476 metres high, and the wild tarns and windswept high plains of the Monte Sibillini provide some of Mrche’s most spectacular landscapes. 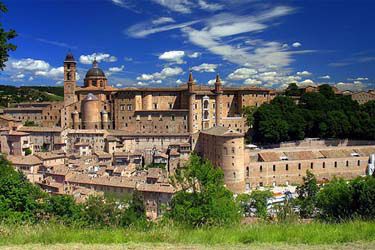 The charming Urbino is the first stop of most tourists going to the picturesque Marche region . Which is not surprising: the city has grown and gained political significance, having been in the possession of the Montefeltro house since the 13th century, more precisely its head – Federigo de Montefeltro. It was he who gathered all the prominent artists, architects and artists of the time to create a kind of “think tank” of the Renaissance. The local university still dominates the life of the city, diluting the quiet evening in Urbino with noisy student parties.

Today, the luxurious city center is taken under the tutelage of UNESCO, as the World Heritage of Humanity.

The Roman Catholic Cathedral of Urbino is consecrated in honor of the Assumption of the Blessed Virgin Mary, the First Cathedral in its place was built in 1021, and it replaced an even older one, located outside the city walls. At 15 in the cathedral was rebuilt under the supervision of the Duke of Federico da Montefeltro.

Palazzo Ducale in Urbino is a beautiful Renaissance building and one of the most interesting monuments in the country, listed as a UNESCO World Heritage Site. Its construction was started under the Duke of Federico III and Monteveltro in the middle of the 15th century.

Let us call you